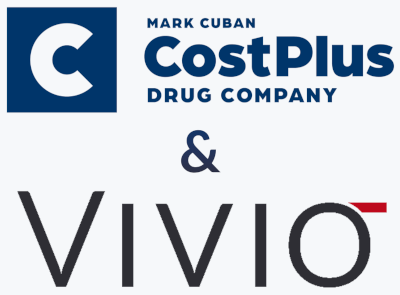 San Leandro, CA – VIVIO, a public benefit corporation reinventing the use of drug trial data in care delivery, announces a relationship with Mark Cuban Cost Plus Drug Company (Cost Plus Drugs) to acquire specialty drugs for less. Since Cost Plus Drugs and VIVIO are Public Benefit Corporations (PBCs), improving public health by lowering the cost of healthcare is as important as the bottom line.

America spends $500 Billion a year on prescription drugs. Less than 2% of prescriptions are written for ‘specialty’ drugs, but these account for $250 Billion, half of America’s total drug spend. Clinical trials and real-world evidence demonstrate that suboptimal drugs are being prescribed frequently. This means we pay for drugs that often don’t work because no one is asking the question, what do these drugs do? VIVIO’s team of clinicians and researchers match drug trial evidence to individual patient data, which improves outcomes, reduces side effects, and lowers member, employer, and health plan drug costs.

“The event that led to finalizing the collaboration between VIVIO and Cost Plus Drugs is as horrific as it is incredibly uplifting,” said Mark Cuban. “Last week I was contacted by a friend from Indiana University who mentioned that a mutual friend was in a dire situation. The mutual friend was quoted a price of $3,000 per month for a generic specialty drug called droxidopa. He asked if Cost Plus Drugs could find an affordable source of the medication.”

The Cost Plus Drugs team went to work immediately, says Cuban. Within a week, Cost Plus Drugs had sourced the same medication at a price of $75 for a three-month supply, less than 1% of the cost Cuban’s friend was paying. “I mentioned this in an interview with Trevor Noah on The Daily Show and this caught the attention of Pramod John, the CEO of VIVIO. As it turns out, VIVIO also has patients taking droxidopa. I am excited to say our relationship was finalized in a matter of days,” said Cuban. “Now VIVIO patients will have access to pay far less for droxidopa and many other medications when using Cost Plus Drugs. I am so looking forward to us working together to benefit patients everywhere!”

“As a Public Benefit Corporation, the interests of VIVIO, our patients, and our employer and health plan customers must be aligned. They want better outcomes and lower costs, and so do we. Unlike PBMs, we don’t have a formulary or own any pharmacies or provider services. Instead, our sole business is to use data to ensure drugs are working for each patient and are acquired at the lowest cost,” says Pramod John, VIVIO CEO. “We seek to partner with other like-minded innovators to drive meaningful change to an industry that desperately needs it but doesn’t want it. Our relationship with Cost Plus Drugs allows our customers to stop overpaying for drugs, and that’s an important part of our mission.”

“A foundational principle for Cost Plus Drugs and VIVIO is fairness and transparency,” says Alex Oshmyansky, CEO of Cost Plus Drugs. “It is never fair to pay $3K for a drug that’s available for $21 or to pay for a drug without the data supporting its use. This causes inflation, premium increases, and a bloated, inefficient $4.2 Trillion health system.”

About VIVIO Health, a Public Benefit Corporation
VIVIO Precision Care™ uses data to fix the big unsolved problem of paying for expensive drug therapies that don’t work for members while causing side effects. VIVIO helps self-insured employers and health plans ensure their members are on the right drugs while not overpaying for them. In 2021, VIVIO customers’ specialty drug spend was 65% lower than national benchmarks.

About Mark Cuban Cost Plus Drug Company, a Public Benefit Corporation
Cost Plus Drugs aims to change the way the pharmaceutical industry operates. As a public-benefit corporation, its social mission of improving public health is just as important as the bottom line. Cost Plus Drugs transparently charges a standard markup on every drug it sells. The costplusdrugs.com online pharmacy launched in January 2022 now carries nearly 1,000 prescription products, delivered by mail to thousands of happy customers every day. Cost Plus Drugs works with health plans, managed-care organizations, pharmacy benefits managers (PBMs), and self-insured employers to bring these same savings to employer-sponsored benefit plans nationwide.